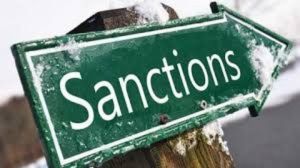 By the end of 2014 Paul Craig Roberts, a well-known American economist and co-founder of Reaganomics, told King World News that Russia could respond to sanctions by unleashing what he called an «ultimate black swan» against the West to repel the attack and retaliate. One of the Russia’s trump cards is its small external debt.

Let me provide some data on the Russia’s external debt ($ billions):

According to world standards, this is an acceptable level equal to about 35% of GDP. For comparison, the average external debt exceeds the 100% in EU countries. It’s equal to 100% of GDP in the United States. The debt is much higher in the countries of «golden billion». It exceeds 400% in Switzerland and Great Britain.

The lion’s share of Russian debt falls on the West (public debt, banks, and non-financial sector of economy). US and European banks are the largest holders of Russian bonds. The sanctions against Russia were imposed in March 2014. Since then the Russian state, banks and companies have regularly paid off their debts with interest rates. According to Paul Craig Roberts, Russia has legal and political grounds for taking a decision to stop payments in the continuing situation of force major. Russia is hit by «superior force». It frees it from liability or obligation when an extraordinary event or circumstance beyond the control. Please note — not to refuse compliance with obligations but postpone the payments. The political ground is the very fact that an economic war is unleashed against Russia. Paul Craig Roberts says the recent evidence of such war being underway is the collapse of ruble. He believes that that the plummeting ruble is not a fatal coincidence but rather a planned action as the war is being waged. The fall of currency puts in doubt the fulfilment of obligations towards Western lenders. Roberts is sure that the fall of ruble can and should be considered to be the «superior force» to justify the suspension of payments till the ruble restores its position. According to him, «the Russians don’t even have to default.  They can just say, «We’re not going to pay this year.  We will do it later.  We’ll do it when the ruble stabilizes.’ You can understand the impact of such a decision by the Russians on the West», says the co-founder of reaganomics. He believes the impact will be telling, especially in case of European banks. As to him, «the European banking system would collapse because those banks are terribly undercapitalized. Some of them have loans to Russia that almost absorb the entire capital base.» He adds «You can understand the impact of such a decision by the Russians on the West.   And given all the linkages and the interconnections — when Lehman Brothers went down it had just about as much adverse effect on Europe as it did the United States.» The American economist says, «I was listening to the news today and there were all these self-righteous people just happy as all get out that they had finally stomped Russia into the ground and ‘Russia is now finished,’ and Russia was broken and ‘would soon be an American vassal state where it belongs.’  And I was listening to this rot and got to thinking, ‘How can people be so utterly stupid?’  But they are, and they are just as stupid in Washington. And in the meantime, as part of this process, Eric, we may see Russia unleash black swans that bring down the Western house of cards….»

I do believe that the Western banking system really resembles a house of cards. At the end of 2014, the Bank for International Settlements (BIS) in Basel published the most recent data outlining the position of foreign banks in Russia and Russian banks abroad, and shedding light on the possible losses for the parties involved (the banking systems) should Russia introduce a moratorium on external debt payments.

Cost indicators of risk for foreign banks in Russia (on 1 July 2014, in billions of dollars)

As can be seen from Table 1, US banks account for the main share of all risks for foreign banks in Russia at 30 per cent. The percentages for the banks of other major countries are: France – 16.2; Great Britain – 12.4; Italy – 9.4; and Germany – 5.7. Altogether, the nine countries listed in the table above account for 86.6 per cent of all risks. The vast majority of all risks for foreign banks in Russia is accounted for by the risk of loss associated with the non-repayment of credits issued to Russian banks. The overall share of these risks stands at 57.2 per cent. The remaining 42.8 per cent falls into the «other risks» category (also called «potential risks» or «contingent liabilities»). These include possible losses for foreign banks arising from their obligations under bank guarantees and derivative financial instruments. Taking into account only the losses resulting from suspension of debt payments by Russia the main losers are going to be (from the largest to smallest): France, the United States, Italy, Japan, Germany, the Netherlands, Great Britain, and Sweden. Paul Craig Roberts is right when he says that the European banks are to suffer most. Media outlets mention the most vulnerable European banks, including Italian UniCredit and French Societe Generale. Some Austrian banks are mentioned too, for instance, Raiffeisen Bank International with its Russian portfolio of 10, 8 billion euros (as of early 2015).

European banks are not threatened by Russia only, but also by Greece, Italy, Spain, Portugal and Ireland. The treasuries of these countries have issued bonds worth of many billions of euros. They are losing their value with each passing day. It undermines the stability of giant banks. According to the Bank of international settlements, the potential risks of German banks in Greece, Ireland and Portugal together exceed 220 billion euros. The French banks run the risks of 150 billion euros.

In the autumn of 2014 the European Central Bank published the results of a thorough year-long examination of the resilience and positions of the 130 largest banks in the euro area. The comprehensive assessment—which consisted of the asset quality review (AQR) and a forward-looking stress test of the banks—found a capital shortfall of €25 billion at 25 banks. Twelve of the 25 banks have already covered their capital shortfall by increasing their capital by €15 billion in 2014. Banks with shortfalls must prepare capital plans within two weeks of the announcement of the results. The banks will have up to nine months to cover the capital shortfall. Actually the report attracted little attention in Europe and the world. The European Central Bank and other EU agencies do their best to conceal the real state of things.

Trouble is, the new tests were still pretty soft. The Switzerland’s Center for Risk Management at Lausanne comes up with more rigorous estimates. It experts, for example, put the capital shortfall for just 37 banks at almost €500 billion, as opposed to the roughly €6 billion reported by the ECB for its sample of 130. This more stringent test mimics how the market value of equity behaves under stress. There are other estimates more close to the one offered by Lausanne Center’s experts. The shortfall facing lenders from JPMorgan Chase & Co. to HSBC Holdings Plc could be as much as $870 billion, according to estimates from Alliance Bernstein Ltd.

Summing it all up, one can agree that the European Union’s banking system is much less stable than the banking system of the United States. According to the last year’s research done by the International Monetary Fund, only 30% out of 300 European banks have the structure and reserves to guarantee profit for a long time compared to 80% in the United States. The European banking system is on its last legs. As Paul Craig Roberts says – it may be brought down as a house of cards. It’s enough for Russian to introduce a moratorium on debt payments. If Greece joins in – the collapse is inevitable. It should be taken into account that in the world of international finances such situations normally give rise to domino effect. If the European system collapses, the banks of the United States will be next.

Let’s remember the Great Depression of the 1930s. The panic at the New York stock exchange in 1929 rapidly hit other American banks. There was some stabilization in 1931 until another, even more powerful, blow followed. It came from Europe. Back then the process was sparked by the collapse of only one bank – the Austrian Creditanstalt. Today it could be Raiffeisen Bank International. I cannot but agree with Paul Craig Roberts who said in his interview that the people in Washington who unleashed the economic war against Russia were utterly stupid.