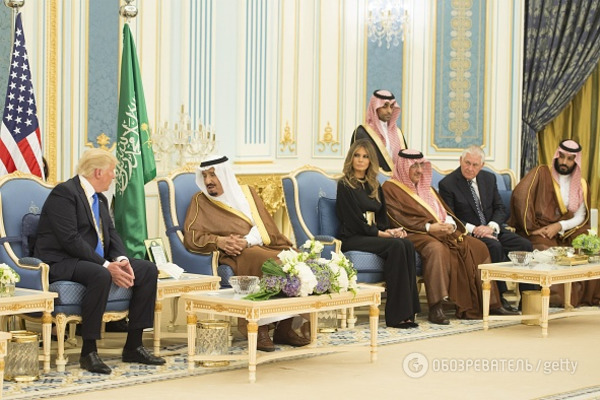 It’s revealing that Saudi Arabia is the first country the American president has visited since his inauguration. That was a first in US history. The choice of Saudi Arabia is all the more interesting because throughout the last year Washington’s relations with Riyadh have been strained. For example, Barack Obama got a decidedly cool reception when he visited Saudi Arabia in April 2016. And now we see this unexpected reversal.

Three key issues were discussed at the meetings in Riyadh.

The first issue officially concerned the war on terror. The American president called on Muslim nations to help shoulder the fight against extremism and terrorism. And some very specific, hard-nosed propositions were camouflaged under broad statements. At the heart of those proposals is the formation of a regional bloc that would be aimed against Iran and Syria. And that bloc would not only be political, but also military. Iran has in effect been declared an enemy of the US, with all that that entails. In the eyes of the strategists in the White House, the bastion of the struggle against the «Iranian evil» should consist of Saudi Arabia and Israel.

The practical payoff to the meeting between the leaders of the Arab monarchies and the US president was an agreement to establish a joint Terrorist Financing Targeting Center. The center’s goals will be to «identify … information regarding terrorist financial networks», «coordinate joint disruptive actions», and «offer support to countries in the region that need assistance building capacity to counter terrorist finance threats».

The second issue is about US arms shipments to Saudi Arabia. The White House has dropped a bombshell: an agreement was reached in Riyadh to sell the Saudis $110 billion of weapons. This is a deal of unprecedented magnitude for Washington. I’ll list some figures to help you grasp the scale of this agreement. Between 2011 and 2015 the US sold a variety of weapons abroad, with a total value of $46.4 billion, accounting for almost a third of the entire international arms market (32.8%). During that time, Saudi Arabia was the world’s biggest weapons importer (almost exclusively from the US) — with purchases totaling $4.57 billion, an average of less than $1 billion per year. But on Saturday, Trump promised to sell the Saudi king over 100 (one hundred) times what that country has purchased on average annually in recent years. And that’s not all: an agreement is being drafted to provide even more shipments, with price tags comparable to that of the deal signed on May 20. The US media recognizes that the pending deliveries of high-precision weapons and military vessels to Saudi Arabia are intended to rein in Iran’s growing influence in the Persian Gulf and Red Sea. It’s noteworthy that shipments of high-precision armaments to Riyadh were suspended back during the Obama era, due to fears that they might be used against civilians in Yemen.

The third issue concerns investment and economic cooperation between the US and Saudi Arabia. Don’t forget that the Americans have been the biggest buyers of Saudi oil for decades, paying for that black gold with their green paper (dollars). The dollars that went to Saudi Arabia came back to the US in the form of deposits in American banks, as well as purchases of US-issued securities. Those include shares and bonds in American banks and corporations, plus US Treasury debt securities. Between 2015 and 2016 this well-established model began to fall apart, and the JASTA Act was to blame. This law, which officially targets «sponsors of terrorism», gave American individuals and legal entities the right to sue state sponsors of terrorism in US courts. The law was tailor-made to be used against Saudi Arabia — the country seen by Washington as the primary sponsor of 2001’s 9/11 terrorist attack. Riyadh protested when the act was passed, promising to pull over $700 billion in assets out of the US.

But suddenly a wondrous metamorphosis has occurred: Washington now no longer views Riyadh as a sponsor of terrorism, but as a «bastion of the fight against terrorism». No one mentioned the JASTA Act during Trump’s stay in Saudi Arabia. Nor did anyone bring up the threat to pull the Saudi billions out of the US. On May 20 and 21, the Saudis signed deals with at least ten US companies. Those agreements will set up new industrial plants with the goal of diversifying the Saudi economy, 90% of which is currently based on the production and sale of oil. Most of those contracts are with the state oil company, Saudi Aramco.

Riyadh understands perfectly well that the era of expensive oil has passed and won’t be coming back. In the last two years Saudi Arabia has experienced huge budget deficits (of almost $100 billion per year), which have been covered using the country’s international reserves. Their attempts to borrow money from abroad by selling debt securities on global financial markets have not been particularly successful. And the Saudi government finally announced that it might privatize Aramco. This state-owned company is privately held and not listed on stock exchanges. Experts estimate it would fetch $2 trillion on the market (making it the most valuable oil company in the world). Shortly before Trump’s visit, Riyadh announced plans to privatize 5% of Aramco, expecting to pocket at least $100 billion for that share. Over the long haul, 49% of the Saudi oil company’s capital could be privatized. Everything suggests that American corporations would like to be the primary beneficiaries of the privatization of Aramco. President Donald Trump will help them out. After all, the current US secretary of state, Rex Tillerson, knows a thing or two about the oil business.