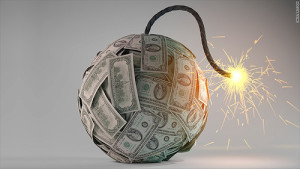 Starting from February, deposits made with the Bank of Japan began to accrue negative interest. The interest rate at the Central Bank of Japan now stands at minus 0.1%. This is no longer seen as shocking. The central banks in developed countries began backing into the negative zone for passive operations several years ago.

The motivation and rationale for the transition to negative interest rates on deposits varies among the different central banks. For the most part, the Swedish Central Bank and the ECB explained their decisions by pointing to the fact that the Swedish and eurozone economies are now faced with the threat of deflation. There are hopes that the negative rate will make money more accessible and will generate at least a bit of inflation. The national banks of Switzerland and Denmark are primarily concerned about the threat of strong upward pressure on their national currencies (the Swiss franc and the Danish krone), due to the crisis in the eurozone, investors’ growing lack of confidence in the euro, and the sharply increased influx of capital from the eurozone into their banking systems. In each case, the directors of the four central banks mentioned the need to stimulate economic development and that in order to accomplish that, no one should be encouraging free capital to be deposited in banks. Negative interest rates on central bank deposits are intended to force commercial banks to turn their attentions to the real economy.

The transition to negative rates has had only a very modest effect. For example, the ECB set its rate at minus 0.10% in the summer of 2014. This step did not reduce the threat of deflation in the eurozone countries, and so the ECB had to further lower its rate. The last rollback occurred in December 2015, when the rate was set at minus 0.30%. Similar events took place at other central banks. The Swiss Central Bank started December 2014 with a rate of minus 0.25%, which a year later had already dropped to minus 0.75%. In the summer of 2015 the Swedish Central Bank was forced to trim its interest rate even further. This was a reaction to the strengthening Swedish krona. And the strengthening, in turn, was driven by events in Greece (the expected default and the eurozone crisis), which increased capital flight from the eurozone into neighboring European countries.

As they say, monkey see, monkey do. The Bank of Japan has become the fifth member to join the «negative-interest-rate club». The West is closely watching this experiment with negative rates. The Bank of England has repeatedly stated that it has not ruled out the possibility of following in the footsteps of the central banks of continental Europe. It could become the sixth member of the club. Experts point to the Central Bank of Norway as the seventh potential member.

The interest rate cut on central bank deposits is inevitably reflected in every other parameter of the monetary, credit, and financial world.

Second, following the drop in interest rates on central bank deposits, interest rates on commercial bank deposits also took a tumble – all the way into negative territory. As an alternative, commercial banks are introducing fees to open and maintain an account. A statement by HSBC, one of the largest banks in the world, drew particular attention. In the summer of 2015, it warned other banks that it would begin to charge fees for deposits in euros, Danish or Swedish kronor, or Swiss francs. Those are the currencies of the countries whose central banks imposed negative interest rates on deposits. For now, HSBC is introducing fees only on the accounts of other commercial banks, which does not affect individual or corporate clients. Last summer a string of small commercial banks in Germany and Denmark announced that for retail customers deposits could become fee-based. And it is true that in some cases private banks are explaining the introduction of negative interest rates on deposits (or fees for holding money) as not only being based on the interest rate policy of the central banks, but also by pointing to the fact that regulations on banking activities have tightened since the financial crisis of 2007-2009. Specifically, the American bank J.P. Morgan has warned that this is precisely why it will begin charging some of its biggest clients a fee on their deposits.

Third, the interest rate policy of the central banks still continues to strongly influence the market for government securities. Namely: at first there was a drop in the yield of these securities, and then some of them began to slide into the negative zone. This shift in the interest rates on government securities is in part due to the impact of market mechanisms (a realignment of the markets for securities and deposits). In part, the government is intentionally pursuing a policy of cutting the yield on its securities. This is done in order to reduce the influx of foreign investors and to prevent a sharp strengthening of the national currency, for example.

US Treasury bonds, which make up the bulk of the international reserves of the central banks of many countries, are receiving particular attention. A big chunk of the portfolios of institutional investors (investment funds, pension funds, insurance companies, etc.) also consist of US Treasury bonds. The yield on those securities has been steadily falling in recent years. It is a mystery to many why central banks, sovereign wealth funds, and other institutional investors are buying US securities that have a purely symbolic interest rate. The answer is simple: because for many other treasury securities that rate is even lower or negative. The first treasury securities with negative interest rates appeared in Europe five years ago. They were exotic back then. Now they’re the norm.

Last year, JP Morgan published some data about the market for «negative» securities. Approximately $1.7 trillion in bonds from eurozone countries with a maturity of more than one year have a negative yield. And another $1 trillion in similar bonds from Sweden, Switzerland, and Denmark can be added to those. Finally, $1.8 trillion of Japanese bonds with a negative yield were circulating in the financial markets a year ago. Last year, Finland entered the market with «negative» securities for the first time.

Just one year ago, only 6.8% of all government securities in the world had a minus sign. But on Feb.1, 2016, Deutsche Bank estimated that the proportion of bonds with a negative yield had risen to 25%. US treasury bonds with a two-year maturity currently have a yield of plus 0.72%, but similar securities in Germany are at minus 0.50% and in Japan – minus 0.17%.

Fourth, the epidemic of negative interest rates has even spread to the market for corporate securities. In January (2016) data from researchers at Bank of America Merrill Lynch (BAML) was released at Davos. According to BAML’s estimates, approximately 65 billion euros of European corporate bonds ($71 billion) are trading on negative yields; in other words, investors who hold these securities are losing money. Conservative investors, who prize dependability and safety over returns, prefer to work with such securities. Classic examples of such securities are the corporate bonds from the renowned Swiss company Nestlé, a manufacturer of food products. The company’s managers calculate that its bonds are in no way inferior to treasuries from the leading Western countries and could qualify for inclusion in the portfolios of established institutional investors.

Fifth, in the corporate bond markets, the trend of lowered interest rates on high-quality securities is in contrast to the trend of inflated interest rates on other securities. Interest rates are growing more polarized: at one extreme are high-quality corporate bonds with low or even negative rates; at the other end one finds the snowballing volume of speculative corporate bonds, which can be classified as junk. The spread, or the interest premium over government borrowing rates, paid by junk-bond issuers has risen by nearly 3.5 percentage points since last March. Today that gap is nearly as great as during the euro crisis of 2011, although it is less than half as much as it was after the collapse of Lehman Brothers in 2008. Yet the rates on low-quality (junk) bonds continued to soar in 2015. The proportion of junk (or toxic) bonds classified as high-risk (having a yield ten percentage points higher than treasury bonds) reached 29.6% by the beginning of this year, up from 13.5% a year ago. According to the rating agency S&P, this is the highest level of «toxicity» in the market since 2009.

The growth of «junk» in the financial markets is promoted not only by the central banks’ interest rate policy, but also by the policy of what is known as quantitative easing. The US Federal Reserve and Bank of England have lowered their interest rates, but still not taken them into the negative zone. It is precisely these two central banks that are pursuing the most extensive programs of quantitative easing, which occurs when central banks buy government bonds (of widely varying quality), thus lowering their yield. The yield on three-month US T-bills even dropped to zero in 2015. Given this situation, many investors have been left with no choice but to switch from low-yield or «zero» government securities over to corporate bonds. The central banks ended up stimulating demand for corporate bonds that are not of the highest quality. And some of those found their way into the portfolios of private investors and soon turned out to be junk. At some point the holders of junk bonds will lose their nerve, and a massive, uncontrolled dump of those securities will be unleashed…

The policy of the Western central banks to cut interest rates, coupled with quantitative easing programs, have established all the prerequisites for the start of the second wave of the global financial crisis.