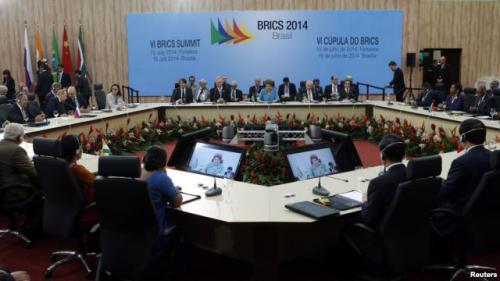 This July the world marks the 70 years anniversary of Bretton Woods Conference, formally known as the United Nations Monetary and Financial Conference. It was the gathering of 730 delegates from all 44 Allied nations, including the USSR, at the Mount Washington Hotel, situated in Bretton Woods, New Hampshire, to regulate the international  monetary and financial order after the conclusion of World War II.

The decisions taken at the conference laid down the foundations of the global financial system. The system used gold and dollar as standards, Washington was obliged to exchange the yellow metal for greenbacks. In the 1970s the Bretton Woods system became a thing of the past in favor of the Jamaica system based on dollar banknotes. The dollar was backed up by black gold and the system was often called an oil-dollar order.

No matter that, the Bretton Woods has not completely faded. The IMF was developed as a permanent international body. The summary of agreements states, «The nations should consult and agree on international monetary changes which affect each other. They should outlaw practices which are agreed to be harmful to world prosperity, and they should assist each other to overcome short-term exchange difficulties». The International Bank for Reconstruction and Development (IBRD) was created to speed up post-war reconstruction, to aid political stability, and to foster peace. This was to be fulfilled through the establishment of programs for reconstruction and development. Since a long time the banks have been facing great difficulties. The International Monetary Fund is going through crisis too. As 70 years since Bretton Woods have passed, a heavy blow was delivered against international financial institutions. The attack came from the resort city of Fortaleza in Brazil.

Although the theme of the summit was “social inclusion”, at the top of the agenda is the creation of two new entities controlled entirely by the five BRICS members. The Bank is setup to foster greater financial and development cooperation among the five emerging markets. It would be headquartered in Shanghai, China and the first chief executive will come from India. The New Development Bank (NDB) will fund development projects independent of the US-controlled World Bank, and the Contingent Reserve Arrangement (CRA) will provide relief from the austere conditions and requirements of the IMF. The decision making process had been in works for a long time. The controversial issues had been settled before the summit. Everything had been prepared in advance, so Fortaleza was the place where the ceremony took place. Media often call the new institutions in a more simple way – the Bank of BRICS and the Reserve Currency Fund of BRICS.

To be initially capitalized at $50 billion ($10 billion being contributed by each of the five countries), the Bank will have an authorized capital of $100 billion, and cater to the infrastructure and development funding needs of the five countries. It’s open for all United Nations members but the BRICS share is to never get lower than 55%. The control stock will always belong to the five founding members. The formation of authorized is to take a few years. The capitalized and contributed shares will be equal with any BRICS member enjoying equal rights as a member of board.

Russia, China, India, Brazil and South Africa will provide 10 representatives to make up the bulk of professional staff to make the Bank function. All the decisions will be taken by the special majority making up four out of five BRICS members or two thirds (in case the membership will be extended). The Bank may become operational in 2015 to fund the joint projects of the BRICS group members. One of the first projects to be funded may be GLONASS – the Russia-produced global navigational system. The stationing GLONASS sites on the territories of BRICS members will make the system more competitive and reliable. BRICS has a unique advantage — the members are located on the territories of four continents.

Now about the reserve pool. The idea was first brought up at the June 2012 BRICS summit in Los Cabos. The BRICS will also set up a $100 billion (73.5 billion euros) joint US dollar currency reserve pool called the Contingent Reserve Arrangement (CRA), in order to provide emergency cash to BRICS countries faced with short-term currency crises or balance-of-payments problems, as Russian President Putin told reporters in Brazil. The CRA’s mission parallels that of the IMF. It will provide emergency funds to governments faced with a sudden shortage of hard currency — especially of US dollars, the dominant currency in global trade and finance. Developing-country financial crises can occur when international investors suddenly pull large amounts of hard currency out of a country because of worries over its banking system’s solvency, a change in interest rates, or some other financial factor. Crises can also result from a sudden drop in the price of a developing country’s main export. For example, a drop in the price of oil or copper can lead to balance-of-payments problems. Vladimir Putin said he is concerned over the policies of Western states which don’t stand out for long-term vision or thorough assessment.

The CRA and the IMF may have a lot of things in common, but there are differences. The International Monetary Fund is an international financial organization with its own capital, Charter and HQ. The CRA is just a mechanism with no headquarters at this stage. The $100 billion BRICS contingency reserve arrangement (CRA) will be raised from the member countries’ central bank reserves while capital for the group’s development bank will come from national budgets. The reserve fund is being established in order to promptly react to the situation on currency markets. Central banks will be able to conduct swap operations if necessary. It is designed to cushion short-term liquidity pressure and promote financial stability. The individual commitments of the five nations to the BRICS CRA will be as follows: China – $41 billion; Brazil, India, and Russia – $18 billion each; and South Africa – $5 billion. The credit decision will be based on national coefficient or a multiplier. In case of China it could be 0, 5. It means if needed China may get not $41 billion but a half. In case of South Africa the multiplier is 2. In other cases it is 1. The CRA assets will be collected from gold-reserves of the member-nations. It’s nothing more than just a framework agreement that was signed in Brazil. The agreement to be put in practice will be concluded later between the countries’ central banks.

Assessing the decisions taken in Brazil, some world media outlets compare the event with the Bretton Woods conference in 1944. Perhaps there is some exaggeration here. It’s hard to say how consistent the group members will be complying with the decisions taken in Brazil. The West’s response is not known as yet. It could be positive or negative, even aggressive. We believe the creation of Contingent Reserve Arrangement was another signal to the West, especially to Washington. It says the time has come to launch the process of reforming the International Monetary Fund. As is known, On December 15, 2010, the Board of Governors, the Fund’s highest decision-making body, completed the 14th General Review of Quotas which envisioned double quotas from approximately SDR 238.5 billion to approximately SDR 477 billion (close to US$737 billion at current exchange rates), shift more than 6 percent of quota shares from over-represented to under-represented member countries, shift more than 6 percent of quota shares to dynamic emerging market and developing countries (EMDCs), significantly realign quota shares. A comprehensive review of the current quota formula was completed in January 2013, when the Executive Board submitted its report to the Board of Governors. The outcome of this review will form a basis for the Executive Board to agree on a new quota formula as part of the 15th Review. The Board of Governors has set a deadline of January 2015 for the completion of the 15th General Review of Quotas. All the countries have already ratified the provisions of the 14th Review except the United States. Washington blocked the process of IMF reform to avoid the loss on control exercised by the United States over the Fund. As of now, the United States holds the 15% blocking package, the US capital share is about 17%. Many American congressmen ask why we should change the 14th Review if it may result in out loss of control over the Fund.

Washington will have to transfer over 60 billion dollars to the International Monetary Fund. President Obama is trying to push the ratification through because without it the Fund will not be able to provide funds for Ukraine. At the same time the ratification will strengthen BRICS and their allies in the International Monetary Fund. Everybody understands well there is a link between the issue of IMF reform and Ukraine, though American politicians have different views on what the implications are going to be like.

The Fortaleza decision to create the BRICS CRA is letting Washington know – go on, ratify the 14th Review of Quotas otherwise will swing over to an alternative currency fund with the participation of many willing besides BRICS. Argentina, for instance.