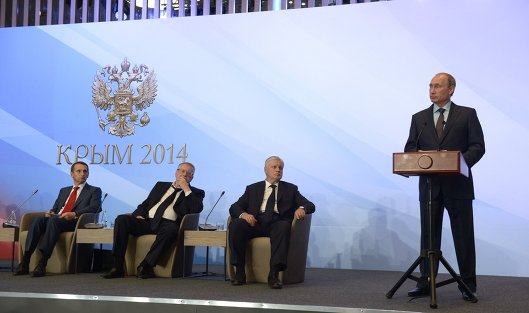 Which EU countries could suffer the most from a retaliatory blow by Russia?

In speaking of the economic war started by the West against Russia, it has been pointed out that on the European front of this war, new disproportions leading to a significant asymmetry are inevitably emerging within the European Union. Only the foreign trade ‘heavyweights’ represented by a small group of European countries could inflict serious damage on Russia. The backbone of this group is made up of Germany, the Netherlands, Poland and Italy. But a Russian retaliation would cause, and is already starting to cause, the greatest damage to other EU member countries… In order to determine which countries could become the main victims of a trade war, let us turn to Tables 4 and 5. They show the importance of trade with Russia for individual EU countries.

* ‘Foreign’ exports is understood to mean the export of goods to countries outside the borders of the European Union. There are also ‘internal’ exports, which is the export of goods from one EU country to another. ‘Internal’ exports top the list in every EU member country (and exceed 50 per cent in nearly all of them). ‘Internal’ and ‘foreign’ exports make up the total exports.

In the ‘foreign’ exports of those countries not listed in Table 4, Russia ranks much lower. These countries are: Belgium, Greece, Denmark, Ireland, Spain, Malta, and Portugal.

In the ‘foreign’ imports of those countries not listed in Table 5, Russia ranks much lower. These countries are: Austria, Great Britain, Ireland, Cyprus, Luxembourg, and Portugal.

Let us try to compare the data in Tables 4 and 5. It can be seen that the lists of EU member countries for whom Russia is the main ‘foreign’ trading partner for both exports and imports are largely the same. Let us now draw up a general list that includes the countries for whom Russia is the number one trading partner (Table 6).

As can be seen from Table 6, there are seven countries in the European Union that are completely dependent on trade with Russia. At present, there is much in the media about the serious repercussions of a trade war for Latvia in connection with the ban announced by Russia on the import of agricultural produce from this country. As can be seen from Table 6, however, the dependence of Lithuania and Estonia on trade with Russia is even greater than Latvia’s. Therefore, Russian counter-sanctions could inflict even greater damage on the economies of these Baltic States. For the remaining four countries (Hungary, Finland, Poland and Slovakia), Russia has been their main foreign trade partner since Soviet times.

Obviously, the statistical data cited above give only a very general overview of countries in the European Union in terms of the ‘value’ of their participation in the trade and economic war against Russia. There are other figures that need to be added to this picture. Investment exchange figures, for example. It should also be borne in mind that a number of EU countries are heavily dependent on energy supplies from Russia. According to Eurostat, the share of Russian gas supplies in the energy mix of the European Union stands at 30 per cent. Finland is 100 per cent dependent on natural gas supplies from Russia, Bulgaria – 85 per cent, the Czech Republic – 80 per cent, Slovakia – 63 per cent, Greece – 55 per cent, Poland – 54 per cent, Austria – 52 per cent, Hungary – 49 per cent, Belgium – 43 per cent, and Germany – 40 per cent. The list of EU countries that are most energy dependent on Russia, therefore, turns out to be certain European countries for whom Russia is not officially the main trading partner.