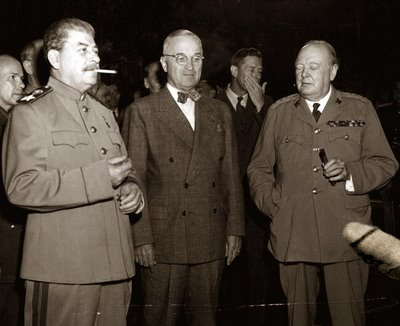 Of all the harm inflicted on all the Allied countries (the Soviet Union, United States, Great Britain, and France) during the Second World War, approximately half occurred in the USSR.

At the Yalta Conference in February 1945, Stalin suggested that Germany pay a total of $20 billion in reparations, anticipating that half of that sum ($10 billion) would go to the Soviet Union — the country that had made the greatest contribution to the victory and endured more than any of the other nations in the anti-Hitler coalition…

With some conditions, Franklin D. Roosevelt and Winston Churchill agreed to Josef Stalin’s suggestion. Ten billion dollars is approximately what the US spent on aid to the Soviet Union under the lend-lease program during the years of the Second World War. Ten billion US dollars, when they were backed by gold (one dollar at that time was technically worth 1/35 troy ounce of gold), were equal to 10,000 tons of gold, so the entirety of the reparations was worth 20,000 tons of gold. In fact, the German reparations that the USSR agreed to accept would barely provide compensation for a mere 8% of the direct damages inflicted upon the Soviets. And the costs of only 2.8% of the total damages were recouped. This appeared to be a generous gesture on Stalin’s part.

These figures stand in stark contrast to the enormous bill for reparations that the Entente Powers (excluding Russia) submitted to Germany at the Paris Conference in 1919. The Treaty of Versailles set the amount of reparations at 269 billion gold marks — the equivalent of approximately 100,000 (!) tons of gold. That nation, which had initially been battered and weakened by the economic crisis of the 1920s, and later by the Great Depression, was unable to pay the enormous sums demanded as reparations and was forced to borrow from other countries in order to meet the terms of the treaty. In 1921, the Reparations Commission reduced the amount to $132 billion, or by approximately 50%, but even that new sum was the equivalent of 50,000 tons of gold. When Hitler took power in 1933 he put an end to the reparations payments altogether. After the Second World War and the establishment of the Federal Republic of Germany in 1949, the foreign ministers of the US, UK, and France forced that new nation to resume payments on the debts owed under the Treaty of Versailles. In accordance with the 1953 London Debt Agreement, the German lands that had been lost after the war were permitted to forgo interest payments until after East and West Germany were reunified. The reunification of Germany on Oct. 3, 1990 reinstated her reparations obligations under the Treaty of Versailles. Germany was given a respite of 20 years to pay off her debts, for which the country had to take out a twenty-year loan of 239.4 million marks. Only late in 2010 did Germany make her final reparations payment to her closest allies. This was very different from the Soviet Union’s policy — only a few years after the end of WWII the USSR refused reparations from Romania, Bulgaria, and Hungary, which were by then fellow members of the socialist community! Even East Germany stopped making any reparations payments to the Soviet Union shortly after that nation was established.

Stalin did not want to see a replay of what had happened in Germany and Europe after the Treaty of Versailles was signed. It was precisely that treaty that forced Germany into a corner and set the stage for Europe’s slide into the Second World War. Speaking about the peace treaty with Hungary at the Paris Peace Conference, Andrei Vyshinsky, at that time the Soviet deputy minister of foreign affairs, explained the idea behind the Soviet policy on reparations, «The Soviet government consistently follows this line in its reparations policy, which consists of starting with a realistic plan, so as not to suffocate Hungary or rip up the roots of her economic recovery, but rather to help in her economic revival, help her get back on her feet, and help her to join the common family of the United Nations and to play a role in Europe’s economic revival.»

The USSR also took this magnanimous approach to other countries that had fought alongside the Germans. This can be seen in the peace treaty with Italy that required the payment of $100 million in restitution to the Soviet Union, although this offset no more than 4-5% of the direct damage inflicted on the USSR.

The principle behind this magnanimous approach to determining the sum of the reparations settlements complemented another important principle of Soviet policy — that of using a country’s current industrial output as the principle means of discharging the reparations debts. This principle was phrased with due regard for the lessons of the First World War. It is important to remember that the demands for reparations imposed on Germany after World War I were exclusively monetary, and to be paid in foreign currency. As a result, Germany had to focus on manufacturing products that were never intended to supply her domestic market with basic necessities, but were instead destined for export, in order to obtain the needed foreign currency. In addition, Germany was compelled to obtain loans in order to pay off each new installment of her reparations bill, which forced her into debt bondage. The Soviet Union had no desire to see that repeated. Vyacheslav Molotov explained the Soviet position at a session of the Council of Foreign Ministers on Dec. 12, 1947: «No deliveries of reparations are currently being made from the western zones, and industry in the combined Anglo-American zone is operating at only 35% of its 1938 level. Deliveries of reparations are currently being received from the Soviet zone in Germany, and industry there is operating at 52% of its 1938 level. Thus, the index of industrial production in the Soviet zone — even though a more challenging environment exists here for industrial recovery — is 50% higher than the index of industrial production in the Anglo-American zone.»

At the Yalta Conference, the leaders of the USSR, USA, and Great Britain reached an agreement regarding the principle of the non-monetary nature of the reparations. The Anglo-American allies once again endorsed this at the Potsdam Conference. But in 1946 they began to work actively to scuttle this policy. In addition, they also undermined other agreements pertaining to reparations. Even at the Potsdam Conference, the allies of the USSR agreed that Germany could partially offset her reparations debts by supplying products and dismantling equipment in the western occupation zones. However, the allies devised obstacles to prevent the Soviets from obtaining goods and equipment from the western occupation zones (only a small percentage of the planned quantities were received).

One consequence of the Cold War launched against the USSR by the West in 1946 was that no single mechanism for the allies to collect and tally reparations was ever created. And once the Federal Republic of Germany was established in the western zones of occupation in 1949, any opportunity for the Soviet Union to obtain reparations compensation from western Germany vanished forever.

Judging by statements from her officials, not even Germany herself knows exactly how much she has paid in reparations. The Soviet Union preferred not to receive reparations in cash, but in kind. According to Russian historian Mikhail Semiryaga, for one year beginning in March 1945, the highest bodies of power in the Soviet Union made almost a thousand decisions related to the dismantling of 4,389 companies from Germany, Austria, Hungary, and other European countries. In addition, approximately one thousand factories were moved to the USSR from Manchuria and even Korea. These are impressive figures. But that depends what you compare them to. The Nazi invaders razed 32,000 industrial plants in the USSR. That means that the number of manufacturing facilities dismantled by the Soviet Union in Germany, Austria, and Hungary represented merely 14% of what was destroyed in the USSR. According to Nikolai Voznesensky, who was at that time the chairman of the Soviet Union’s Gosplan Committee, the value of the equipment taken as spoils from Germany compensated the Soviet Union for only 0.6% of the direct damage she suffered.

Some data can be found in German documents. Thus, according to information from the West German Ministry of Finance and the Federal Ministry of Intra-German Relations, all that was confiscated from the Soviet occupation zone and the German Democratic Republic prior to 1953 was worth 66.4 billion marks, or 15.8 billion dollars. German experts claim this is equivalent to $400 billion in today’s dollars. Confiscations were made both in kind as well as in cash. The reparations that passed from Germany to the USSR primarily consisted of the following: goods currently being manufactured by German firms — 34.70 billion marks and cash payments in various currencies (including occupation Reichsmarks) — 15.0 billion marks.

Between 1945 and 1946 a common form of reparations consisted of dismantled equipment from German companies that was sent to the USSR. In March 1945 a Special Committee of the Soviet State Defense Committee was created in Moscow, which coordinated all the work to dismantle German military-industrial facilities in the Soviet zone of occupation. Between March 1945 and March 1946, decisions were made to dismantle more than 4,000 industrial plants: 2,885 from Germany, 1,137 from German companies in Poland, 206 from Austria, 11 from Hungary, and 54 from Czechoslovakia. The key equipment was dismantled at 3,474 sites, and 1,118 million pieces of equipment were confiscated: 339,000 metal-cutting tools, 44,000 presses and sledgehammers, and 202,000 electric motors. Sixty-seven factories that manufactured only military goods were dismantled in the Soviet zone, 170 were destroyed, and 8 were converted to civilian production.

However, once this equipment was dismantled, manufacturing came to a halt in eastern Germany and unemployment surged, so by early 1947 the Soviets began to limit reparations of this type. Instead, 31 joint-stock companies created with Soviet entities were established, based on 119 large firms in the eastern occupation zone. In 1950, these were responsible for 22% of the GDR’s industrial output. In 1954, all joint-stock companies created with Soviet entities were freely transferred to the German Democratic Republic. This represented the final word in that chapter from the history of WWII reparations.