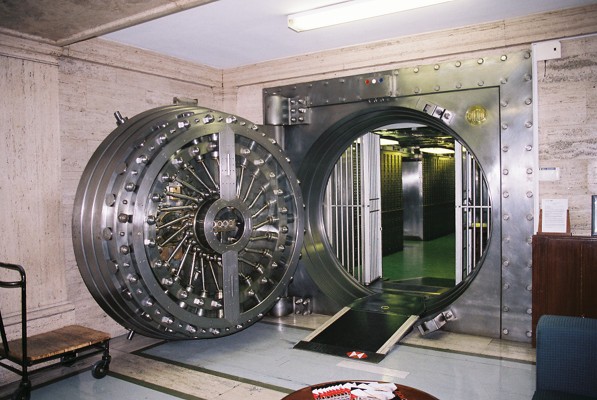 It’s a long time US grassroots and Congress members started to doubt there was anything left in the US official gold storage, and even if there was, it had anything to do with gold. There has been a flow of world media publications in 2012 presenting irrefutable evidence the world market was flooded with goldbricks, and tungsten, that has the same specific gravity, is used instead of yellow metal. There are a lot of indirect signs proving the banksters have dug a hand into the Treasury gold reserves a long time ago…

The last time the US «elected representatives» saw the Fort Knox (the largest official reserve storage) gold with their own eyes was at the beginning of the 1950s, that is six dozen years ago. In 2012 the pressure from Representative Ron Paul, an irreconcilable Federal Reserve Systems critic, made a sampling audit decision come into force.

The audit has just been done. There is little known about it. There have been some leaks concerning the Reserve Bank of New York’s underground vault in Manhattan. The process involved about half a dozen employees of the Mint, the Treasury inspector general’s office and the New York Fed. It was monitored by employees of the Government Accountability Office, Congress’ investigative arm. Inside, a massive scale is ringed by 122 blue cages that hold about 530,000 gold bars — 34,021 of which belong to Uncle Sam (the rest belonged to other countries). The auditing team counted the U.S. stash, selecting more than 350 bars from which to extract samples for assaying. The audit happened to be too «selective» – only one sample among 100 was tested. And the bulk of the reserve is kept at other places like Ft. Knox, West Point and the U.S. Mint in Denver. These three locations hold 95% of the country’s bullion. Personally I have not found any information confirming auditing and testing have been done there. So the real ratio may be not 1:100, but rather 1:1000.

It’s strange enough the whole audit boiled down to tungsten goldbricks. For this purpose ultrasound is enough, there is no need for drilling. The whole Treasury reserve could have been swiftly tested with ultrasound to reduce expenditure. To my mind, the US powers put on a show that may linger for dozens of years and cost a lot (each time drilling is done there is gold lost and expenditures follow). Actually drilling and ultrasound make up an important but not the decisive part of audit. The main thing is the study of documents to make head or tail of what financial and commercial transactions with state gold have taken place. That’s what nobody even drops a hint at, not even Ron Paul.

So, what relation does the «limited» audit have to the «Judgement Day»? They say the ingots drilling show was over as far back as in the summer, no results have seen light as yet. Back then there a was a phrase that flashed in US media saying, «the Treasury Department has refused to disclose what the audit has revealed so far, saying the results will be announced by year’s end»… Let’s note: it’s not January 2013, but the end of the year, that is December 2012. Can it mean anything?

Much was said this autumn about Germany’s decision to transfer its gold from abroad back to its territory. Germany is the world’s second largest gold reserves holder with some 3,400 tons worth (3,396 to be precise), an estimated $190 billion at current rates. The bulk of «yellow metal» it is kept abroad. 31% is domestically stored, while 45% is kept in the USA, 13% – in Great Britain and 11% – in France. The Bundestag raised the issue of returning the reserves as far back as January, but unexpectedly the plans hit the wall of smoldering resistance. There is somebody who strongly dislikes the idea of getting it back.

The Bundesbank, the holder of official gold reserves, was the first line of defense. The parliament didn’t have enough authority to make launch the repatriation procedures. It reluctantly started to do so only after the German Federal Court took the decision and made it conduct an audit of the reserves held abroad by transferring small parts of the metal back home to be melted down and reformed to standard bars to test its authenticity. Totally the plans call for repatriation of 150 tons over the next three years to check the quality and weight of the gold bars.

The Federal Reserve System, that keeps the national gold in it vaults, has become the second line of resistance to Germany. At first the counteraction was verbal. For instance, CNBC, an outlet under the influence, was used. John Carney. Senior Editor, CNBC.com. published an editorial containing an intriguing statement saying, «it does not matter one bit whether the Federal Reserve Bank of New York actually has the German central bank’s gold or whether the gold is pure. As long as the Fed says it is there, it is as good as there for all practical purposes to which it might be put. It can be sold, leased out, used as collateral, employed to extinguish liabilities and counted as bank capital just the same whether it exists or not». He added, «As I mentioned above, for almost all imaginable operational purposes, the actual existence of the gold in Fort Knox or in the vault beneath the FRBNY’s Liberty Street headquarters is irrelevant. The bookkeeping is what really matters here. So long as the Fed says Bundesbank owns X tons of gold, the Bundesbank can act as if it did own the gold—even if the gold had somehow been swallowed into a gold-eating galactic worm hole». According to him «I’m sure the Bundesbank officials understand this quite well, even though the German Audit Court does not. There is nothing to be gained by inspecting the gold. If it is all there and pure, there is no difference from an undiscovered absence. But if the gold isn’t there, well, calamity could follow as trust in the central bank gold depositories evaporated instantly».

The «rebuff» made it impossible for Germans to discontinue their insistent demands on getting the gold back. Then more telling arguments followed, like the force of nature, for instance. In October this year the US continental East Coast was struck by hurricane Sandy. New York was hit too. The conspirologists started to make hints the hurricane was «man-made», somebody needed it, and for this somebody the Federal Reserve Bank of New York’s underground vault in Manhattan was the main target to be demolished, destroyed or flooded. The US media reports concerning the matter are rather confusing. For instance, the Daily Bail, which is part of CNBC Empire, publishedon October 30, 2012, «In a hastily convened press conference, Fed Chairman Ben Bernanke announced Monday night that the ConEd explosion in NYC had completely destroyed the underground vault holding all of Germany’s gold reserves, thereby nullifying all recent German attempts at gold repatriation… The WSJ’s Jon Hilsenrath reports the gold reserves were not insured».

At that, some experts say there was no hurricane. The media under the Federal Reserve control created an «information image» of the natural disaster. In reality there were only gusts mixed with strong wind and drizzle in New York while the hurricane went on a rampage elsewhere on Monday. The Internet offers multiple droll recreational pictures made by Americans showing the «nature going wild». According to official information the death toll was 13 in the USA and Canada. Try to check that, especially if another country is involved! For instance, in the Russian small town of Krymsk the natural disaster death toll was 150-170. Talking about the Con Edison explosion and a few million people left without electricity, there is solid ground to believe it was «man-made». A kind of «miniature» 9/11.

It’s a pity no further details related to the Manhattan vault were released. Even the Federal Reserve System never came out with soothing statements saying everything was to be all right, the vaults were to be restored, the gold would be returned. Ominous silence. Germany doesn’t say a word too. There is a row in the air. Apparently Bernanke has no intention of giving the Germans their gold back. Or, perhaps, there is nothing to return?

What other «natural disasters» maybe in store? Someone in the USA seems to be dry behind the ears in staging «disasters» of this kind. For instance, the 9/11, 2001. This event may indirectly influence the issue of the German gold, as well all gold kept in Federal Reserve New York vaults. First, after the World Trade Center twin towers went down, a few tons of gold stored underground vanished (it was private, it didn’t belong to any state). Second, even under the wrecks some documents, related to the investigation of illegal Federal Reserve and CIA gold transactions, mysteriously disappeared. The investigation was stopped as a result.

Finally, a year after the 9/11, 2001, German Neue Züricher Zeitung cited legendary US billionaire Warren Edward Buffett predicting the first nuclear terrorist attack on US soil was to take place in the next ten years. It falls on 2012; there are a few days left! If a nuclear device strikes New York then the gold will become radioactive and Germany will lose the desire to repatriate it. In this case it adds some meaning to the Warren Buffet’s prediction. The Judgement Day may become a reality, if not for the entire humanity, then, at least, for the New Yorkers. Being in the vicinity of the Federal Reserve is becoming perilous.

Dr. Valentine KATASONOV holds Ph.D. in Economics. He is the Chairman of Sharapov Russian Economic Society.